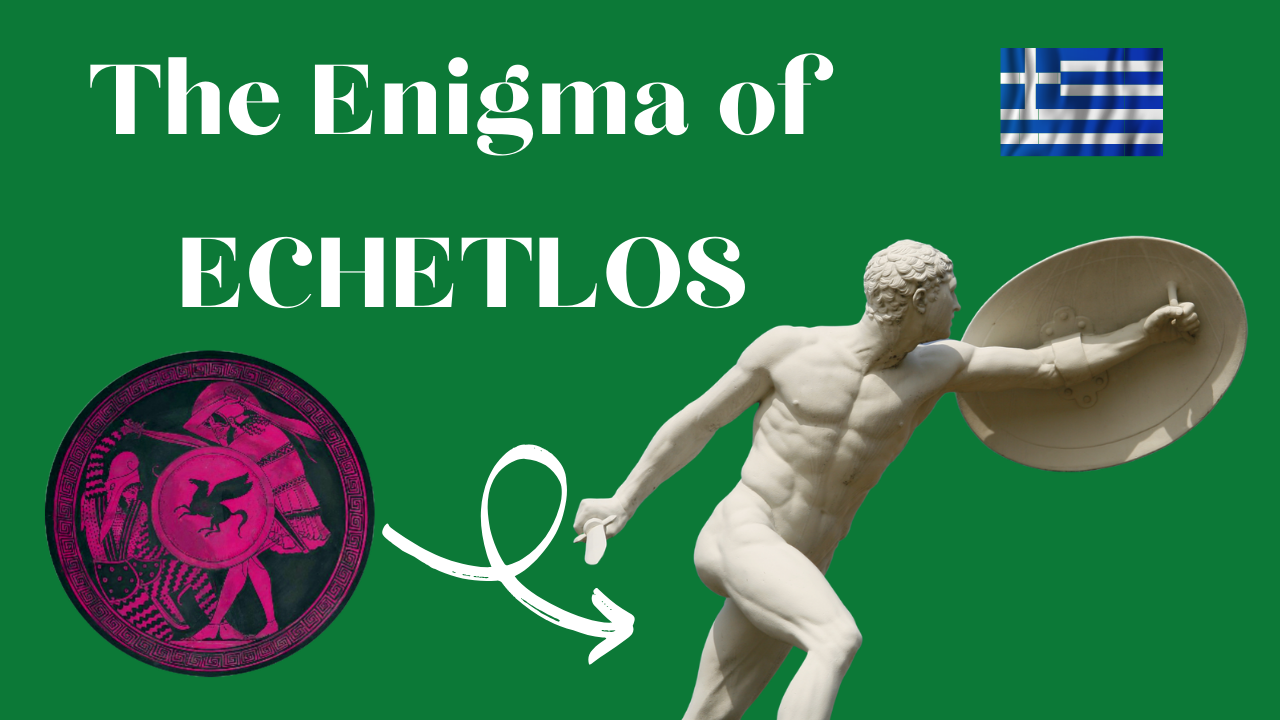 If you are interested in Greek history, then you must be aware of the Battle of Marathon – one of the greatest battles of the ancient world, along with the Battle of Thermopylae.  Now, that was a historical event and this series is dedicated on Greek mythology. However, sometimes, historical events are accompanied by legends. And today’s video is dedicated on such a legend: Echetlaeus, the super-hero of the battle of Marathon. But let’s take everything from the start.

The Persians, the Greeks, and the Greco-Persian Wars

Two ancient civilizations of great significance are the Persians and the Greeks. These two civilizations eventually clashed in a series of conflicts that lasted between 499 and 449 BC and we now know as “The Persian Wars”. The legendary figure we will talk about today appeared during the First Persian invasion of Greece which ended with the victory of the Athenians at the battle of Marathon 490 BC.

It all started in 547 BC, when the Persian Empire, which was lead by Cyrus the Great, conquered the Ionian region in Asia Minor, which was inhabited by the Greeks. The massive and ever-expanding Persian Empire soon noticed how independent-minded the Ionians were and a decision was made to appoint tyrants to rule each Greek-inhabited city.

That decision had the exact opposite effect from what they desired; the Ionian Greeks did not seem to conform. They actually started revolting and, with military support from Athens and other Greek city-states, they managed to cause a lot of trouble to the Persians, which included burning down the city of Sardis, the city that, according to the historian Herodotus, was founded by Hercule’s sons and later captured by the Persians.

These riots lead to the Persians deciding to take immediate action towards discipling the Greeks and making sure that the rest of the minorities in the Persian Empire would remain well-behaved. And they started by attempting to punish the Greek city-states that helped the Ionians revolt against them.

The first Persian invasion of Greece, as documented by the “father of history”, Herodotus, began in 492 BC and ended with the Battle of Marathon in 490 BC. The Marathon is a town in the east part of Attica – the region in which Athens belongs to. In the plains surrounding the town, approximately 11.000 Athenians (and people from Plataea) fought over 100.000 Persians and, although they were outnumbered, they managed to win. According to the legend, after the win, the best Athenian runner, Pheidippides, run to Athens at a very high pace from Marathon to Athens to announce the news. Right after he arrived in the city and exclaimed “we won!”, he died from exhaustion. And this is where the idea of running a Marathon comes from.

TL;DR: The Persians captured the Greek region of Ionia in Asia Minor. The Greek-inhabitants revolted with the help of Athens and other Greek city-states. The Persians tried to invade mainland Greece to diminish any dangers against their empire and the first attempt ended with the battle of Marathon. In this battle, some interesting things were documented by ancient historians.

The Myths Surrounding the Battle of Marathon

The battle of Marathon is of great strategic significance. The Athenians were outnumbered but, by trapping the massive Persian army in the plains of Marathon, they were able to win the battle. However, since ancient times, some legends surround this historical event that try to explain how a small Greek army was able to defeat an enormous army of another advanced ancient civilization. What “paranormal” activities happened during the battle? Who was the warrior Echetlaeus/ Echetlos who fought with the Greeks, but no one knew or expected?

The first myth(?) that has survived till today says that Pan, the half-man – half-goat god, was observing the battle from a cave close to the battle ground. At one point, the runner Pheidippides came face-to-face with the god and the second had an important question to ask: why the Athenians did not honor Pan as much as they honored the Olympian gods. Pheidippides promised that the city-state of Athens would honor Pan from now on and the god is said to have helped the Greek army by scaring away a part of the Persian army with his loud, terrifying screams. The enemies were in panic mode: a term we use even today to express great fear.

The philosopher and biographer Plutarch mentions that the ghost of the mythical king Theseus appeared in the battleground and fought against the Persian army. And even gods and goddesses from mount Olympus were believed to have helped the Greek army in various ways. But the most enigmatic “supernatural” presence in Marathon is described by the ancient geographer Pausanias: Echetlaeus.

In the Stoa Poikile in the north side of the Ancient Agora of Athens, a painting was created that displayed the heroes of the Battle of Marathon. This painting included the hero Echetlaeus (also seen as Echetlaus and Echetlus), who appeared on the battle-ground out of nowhere, fought against the Persians along with the Athenians, and disappeared after the end of the battle.

He was dressed up like a farmer and he held a plough and a cattle prod. These agricultural tools were his lethal weapons; he is described as killing countless enemies with no effort. Despite wearing no protective gear, he was not wounded and his appearance resembled a god: he has tall and muscular – almost unhuman.

Echetlaeus was worshipped by the Athenians as the hero of the echetlon (ploughshare). His name survives till today, although he is not as well-known as Hercules and other ancient Greek heroes. Some people believe that Echetlaeus was sent by the god Pan, since he was seen exiting the same cave from which Pan was observing the battle. However, others speculate that he is connected to Demeter, Persephone and the secret agrarian rituals revolving them: the Eleusinian Mysteries. And this is connected to another legend that wants the Athenians to have witnessed the Eleusinian procession the night before the battle – however, the people marching resembled ghostly-figures and not real people!

What are your thoughts on Echetlaeus? Do you think he is a mythical or a historical figure? Was he a strong farmer that happened to pass by the battle-ground and joined the Athenians or a “super-natural” being? And if he was not a human, was he sent by Pan or Demeter and Persephone? What other myths do you know surrounding this major historical event?

4 Replies to “Echetlaeus: The Mythical Hero of The Battle of Marathon | #GreekMyths”