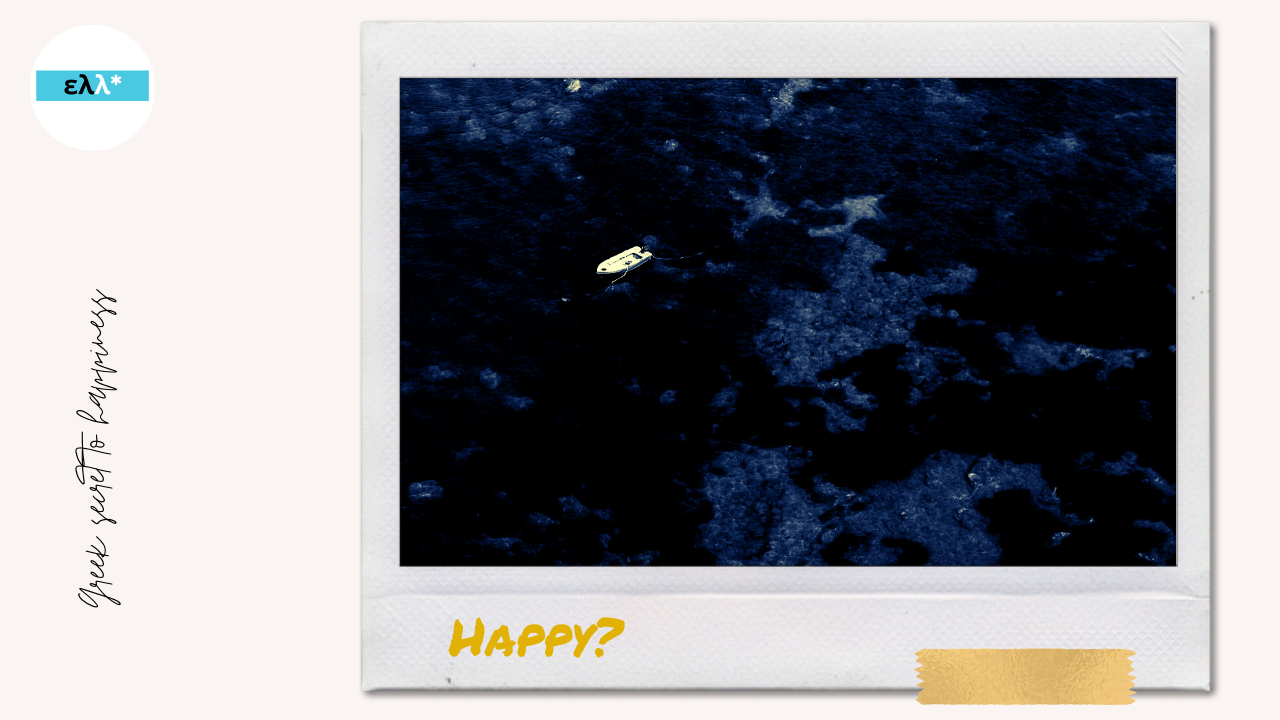 In the 1960s’ romantic comedy film “Never on Sunday”, an American classicist visits Greece to find the secret to happiness. Years earlier, the book “Zorba the Greek” follows a young intellectual to the island of Crete, where he tries to liberate himself from his bookish life. Greece and specifically the Greek countryside and the Greek islands, are often portrayed as the lost paradise; the eternal vacation destination where time moves slowly and everyone lives a happy, long life.

The truth is that it is hard to pinpoint what happiness really is. Is it an abstract philosophical idea or a measurable variable? The Sustainable Development Solutions Network, supported by different foundations, publishes the “World Happiness Report”, which tries to measure happiness based on six key variables, including income and absence of corruption.

Greece is objectively in a negative position in both cases. But, throughout the years, even during the difficult financial period of 2010-2018, Greece – or at least the Greek countryside- has been perceived as a generally happy place. Is this based on a stereotypical portrayal of smiling Greeks breaking plates and dancing syrtaki on a postcard? Or are there more things to consider when talking about happiness?

A Stoic Perspective on Happiness

The Stoic philosophers have long been associated with holding the key to a happier life. They understood that happiness is a mental state and, therefore, external factors, such as money or government corruption, are irrelevant. In other words, it is not the things that happen to you or your circumstances that influence your mental well-being, but the way you perceive these events and circumstances.

As someone who grew up in Greece and was influenced by the Greek culture and the Greek way of thinking, I have noticed that there are indeed many things that Greeks believe or do that help them be more content with their life.

Happiness and The Greek State of Mind

The first thing that comes to mind is the attitude of Greeks towards indulgence. In the video on modern Greek culture, I mentioned that Greeks have intermediate scores when it comes to indulgence vs. restrain. That means that we learn from a young age how to do everything in moderation and enjoy the pleasures of life without guilt.

There are many cultures that promote a very strict disciplined lifestyle. And that can be translated as having long periods of avoiding sugar, fats, alcohol – you name it – and then a weekend of emotional eating or getting blacked-out drunk, even putting themselves in great danger. The object of indulgence is demonized and people feel guilty for giving in. Now, that doesn’t mean that there are no Greeks who fall into a vicious cycle like this, but this mentality of constantly feeling guilty is far from the Greek way of thinking.

That may surprise some, since the modern Greek culture is heavily influenced by the teachings of Greek Orthodox Christianity. The latter suggest an ascetic, simple life, that focuses on mind and soul over matter. Today, however, this lifestyle is usually followed by people who choose to live in monasteries, rather than the average Greek Orthodox believer or even priest. Greek priests are often the “life of the party” of every village – drinking and dancing in traditional festivals.

But even the ascetic life of the monks is not free from pleasures. Monasteries in Greece are always located in breathtaking locations, usually on a hill to have an inspiring view. Keep this in mind because this will make more sense later.

Now, another thing that may contribute to the happiness of Greeks is the mindset that everyone deserves to have a good, fulfilling life.No matter the size of your house or the amount of money saved in your bank account, you should avoid misery at all costs. We often say «η φτώχεια θέλει καλοπέραση» – “poverty needs fun”. It may sound cheesy but dancing, singing, and telling jokes is for free. And other fun activities, such as eating and drinking with friends, do not always cost a fortune.

What I’ve noticed when I got in touch with people living in other countries in the world is that there are certain cultures that make people feel guilt for having fun and enjoying life, when they are things missing from their lives – including money. The Greek way of thinking dictates that you should not postpone happiness. You should enjoy life, with all the means you have, now.

Then we have the concept of “meraki” – and specifically working with meraki. Meraki is when you put all your effort towards your work. Have you ever watched an old man in an Greek island making a kaiki – a traditional fishing boat? How slowly and carefully he carves the wood and paints the details. Working with meraki, with all your attention and focus, is the opposite of what a modern economy needs to be the world’s leader: mass production and quantity over quality. But it can make you feel more creative and fulfilled with your work. More content with your life.

Another thing that comes to mind is the concept of “comicotragedy” in the Greek culture. Situations that are both comical and tragic, in which laughing and crying are both acceptable reactions. Foreigners are often surprised to find out that their favorite upbeat song that everyone dances to is actually describing a painful breakup. Greeks don’t have less tragic events happening to their lives than others. But they learn that they can make jokes with the things that bring them down, such as losing a job, a relationship or dealing with a health issue. It may be a coping mechanism but… it works!

Last but not least, let’s not forget that Greece has a collectivistic culture, where people keep strong ties with their close family members. You always feel like someone has your back and, by seeing yourself in a group, it is less likely to question your purpose and the reason for your existence.This of course is a double-edged sword, since you may feel too comfortable with what you have – you may be reluctant to take risks, open a business, or take a different route than the one of your family members. But today’s topic is about happiness, not risk-taking.

But are Greeks happier only because of their way of thinking? Well, there must be some external factors as well. I am not going to be mentioning the role of sunlight and vitamin D, since studies have shown that vitamin D deficiency is also prevalent in Greece. But here is one external factor that I believe is connected to those living in the Greek countryside being overall content with their life. It may sound strange but bear with me.

Have you ever noticed how most Greek villages are located on a hill, built amphitheatrically, and overlooking the sea? Greeks have been placing a great focus on location since ancient times. They would avoid areas that are flat, dark, and far from a water source. There were practical reasons for this but, at the same time, living somewhere with a great view uplifts your spirit. You may live in a tiny house in a small village, but you feel like the king of the world. You have access to fresh fruits and vegetables, fish from the sea, and a house that you wouldn’t change for anything, no matter how humble it is. The magnificent landscapes are attributed with inspiring ancient Greeks to travel and explore new places, hence starting trading and building a strong civilization.

There are other parts of the world, even in the biggest economies, where living in nice landscapes requires a lot of money. Hills are reserved for the upper class and there are particular areas with affordable housing. People who struggle financially have to live in buildings that resemble boxes. Grey walls, no natural light. In this case, happiness and inspiration require a heavy wallet.

Is a Happy Life an Exciting Life?

Before we end this video, I need to address that there is no global definition for happiness. In Greek, «ευδαιμονία» or «ευτυχία» is perceived as being overall content and satisfied with your life. Not necessarily smiling excessively, being always in a good mood, or living an extraordinary life. It is about the small things. Enjoying a cup of coffee looking outside your window. Taking care of your plants and making sure that your home feels homy, no matter how small. And most importantly, knowing that you are worthy of happiness – now, not sometime in the future, when everything will be perfect.