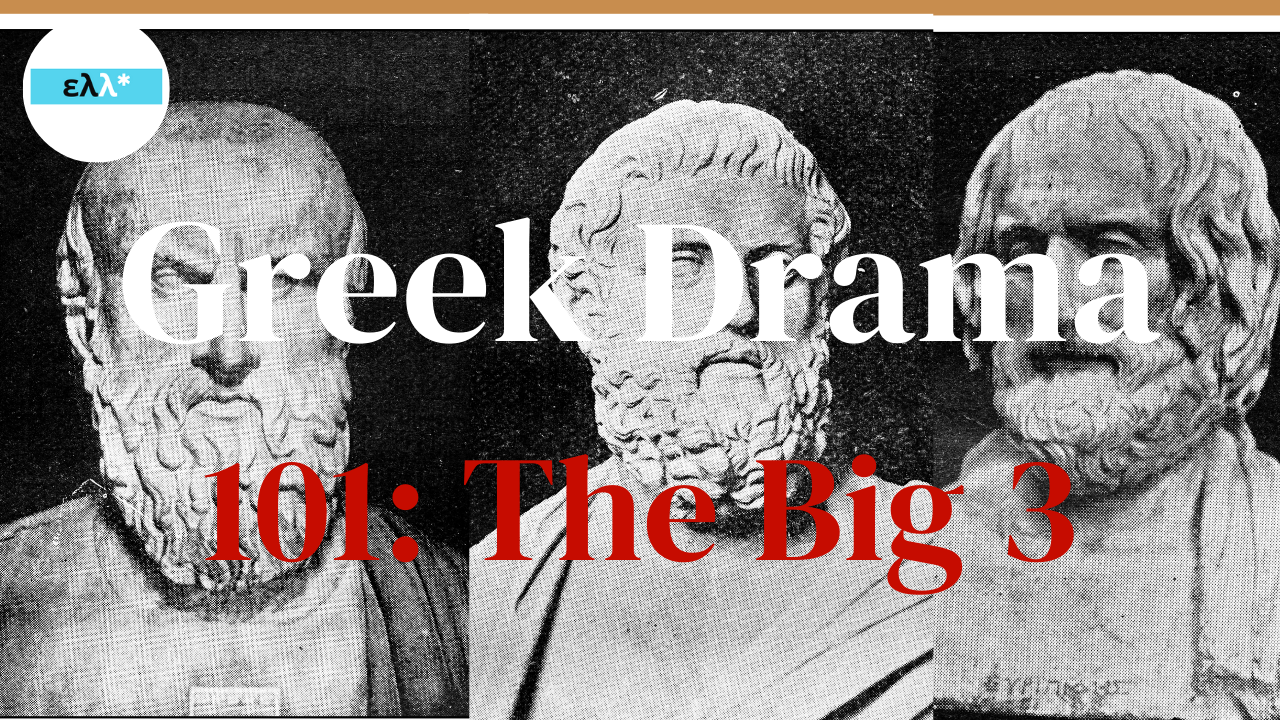 Last time, we discussed the basics of ancient Greek theater. The history of drama, its peak years with the Dionysian competitions, and the formation of the three distinct types of drama, which are tragedy, comedy, and satyr. Today, Helinika is introducing the big- three ancient Greek tragedians: Aeschylus, Sophocles, Euripides. Before we get started, make sure you are subscribed to this YouTube channel and never miss a video in the future.

Our understanding of the earliest Greek tragedies comes from Aeschylus. He is the tragedian who gave great power to the art of tragedy. He added more characters than usual in his plays and added more interactions between them. He basically introduced the theatrical dialogues and the concept of the protagonist and deuteragonist (second actor). That is why he is known as the “father of tragedy”.

Aeschylus was born in 525 BC in the city of Eleusis, just few kilometers away from Athens. He came from a noble family and, before his theatrical career, he worked at a vineyard. He was a respectable member of the Athenian community.

The tragedian had also fought at the battle of Marathon against the Persians in 490 BC, where he lost his brother. One of his most well-known works are “Persai” (The Persians), the only ancient Greek tragedy that was inspired by real events, rather than ancient Greek mythology.

Aeschylus died in 455 BC in Sicily. It is rumored that he died under comico-tragical circumstances. He was allegedly walking on a field, when a turtle fell on his head and killed him. According to the story, an eagle had caught the turtle and dropped it on the ground to break its shell; a technique that eagles often use to eat their pray.

There are many tragedies attributed to Aeschylus. Many of them have not been saved (e.g. Myrmidons, Nereids etc.). Here are some popular tragedies by the “father of tragedy”:

Sophocles was one of the most successful playwrights in the Dionysian competitions. He won 24 out of the 30 theatrical competitions he participated in. He is attributed with adding a third actor on stage and reducing the importance of the chorus – the dancing choir – in the plot. The plays now started to resemble more the theatrical plays we watch today.

The Greek dramatist was born in 497 BC in Colonus, in the outskirts of Athens. He was born into wealth and his father was an armor manufacturer. He died at the age of 91 in 406 BC in Athens. There are several urban legends on how he died. Athenians would say that he choked on a grape or that he tried to recite a long sentence from one of his plays, without pausing to take a breath.

Sophocles wrote over 120 plays but few have been saved:

Euripides is now one of the greatest ancient Greek tragedians, but he needed time and hard work to be recognized as such. He was the youngest of the big-three and the one who was ridiculed the most at the start of his career. He was the target of the “father of comedy”, Aristophanes.

The tragedian is attributed with many theatrical innovations. He represented mythical heroes as ordinary people. The audience could identify with their suffering. He shocked his colleagues with how he represented women: as humans with real and complicated personalities. Women were as virtuous as men, if not more. “I would rather stand three times with a shield in battle than give birth once.” – his heroine Medea says.

Euripides was the “most tragic” of the poets. He cared for the misunderstood and the misfits more than he cared for the war heroes. He died in 406 BC at the age of 74 in the Greek kingdom of Macedonia. Some say he was struck by lightning. Others, that the cold winter in the northern part of Greece were to blame.

Euripides wrote between 92 to 95 plays, from which eighteen survived. Some of his most popular plays are:

Stay tuned till the next episode. We will be discovering the tricks ancient tragedians used to help the audience get immersed into the plot. Did they use any machines? If you enjoyed this video, feel free to comment and like.