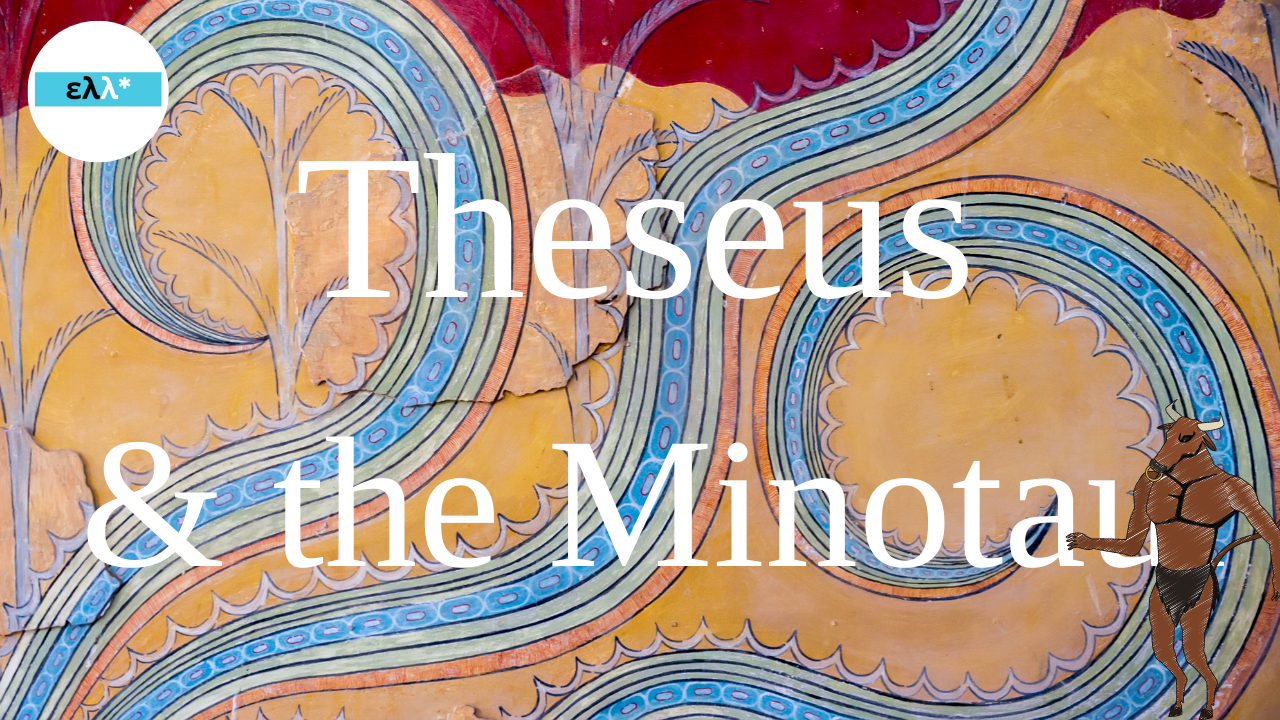 One of the most fascinating ancient Greek myths is the one of Theseus. The young Athenian hero is a legendary figure, although many scholars believe that he might had been a real king during the Late Bronze Age. But let’s see his story from the beginning.

Once upon a time, before the era of Classical Athens and Democracy, the Greek city-state was ruled by kings and queens. One such king was Aegeas. He had many riches and he was ruling a successful city-state. However, he had no luck in his love life. All of his marriages ended in disaster, he remained childless, and most importantly, heirless.

Aegeas believed he was cursed by Aphrodite, goddess of romance, and he introduced the worship of Aphrodite Urania (Heavenly) in Athens. He also visited the Oracle of Delphi and asked for a prophecy. However, there was no solution to his problem.

The Athenian king finally met Pittheus of Troezen who introduced him to his daughter, Aethra. The two spent the night together and Aethra was able to conceive a child: a boy she later named Theseus. Rumor had it though that Theseus’ real father was Poseidon, god of the sea, and not Aegeas.

The latter was happy to finally have a son. He left Troezen to rule his city, Athens, but made sure to leave his sword, shield, and sandals behind. His son would wear them upon he reached adulthood to claim his birthright.

Theseus’ Labours and the Arrival to Athens

Years passed by and Theseus was now a brave young man. After retrieving his father’s possessions, he started his trip to Athens. Instead of reaching the city by sea, he decided to follow a dangerous path, completing a series of tasks, known as “labours”.

Among other things, he killed a giant pig and countless bandits, including a serial killer named “Procrustes” or simply “the Stretcher”. This man would place his victims on an iron bed and would cut off any parts that didn’t fit. If the victim was too short, he would stretch their legs – often splitting them in half.

Theseus arrived in Athens safe and sound and he was finally greeted by a cheerful Aegeas and his new wife, Medea. You might remember the latter as the wife of Jason, leader of the Argonauts. Since Medea’s story will be narrated in a different video series, all you have to know for now is that Medea’s first marriage did not have a happy ending. It was a literal tragedy.

Theseus and Aegeas would spend a lot of time together to compensate for all the years they spent apart. Medea was getting jealous. She also feared that her son would have no rights to the kingdom of Athens. The sorceress decided to poison Theseus but her plans were revealed. Aegeas threw her out of the castle and Medea run away from Athens. The king did not know that this would not be the only time his dear son would be in danger.

The Sacrifice to the Minotaur

When Aegeas was younger, he participated in the Panathenaic Games – a religious ceremony and athletic competition that took place in Athens and resembled the Olympic Games. One of his competitors was Androgeos, son of King Minos of Crete. Androgeos was able to win against Aegeas, with the latter being filled with envy.

There are many different variations of the myth that explain what happened next: Aegeas challenged Androgeos with an impossible task that ended up killing him, Aegeas ordered someone to kill Androgeos, or Aegeas killed Androgeos himself, or another man named Pallatides. No matter how it happened, the result was the same. Androgeos died in Athens and Aegeas was to blame.

King Minos learned the news and declared war on Athens. But the two kings were able to avoid war with a mutual agreement. Every nine years, seven Athenian young men and seven Athenian young women would be sent to Crete as a sacrificial offering to a vicious monster known as the Minotaur – the taurus, meaning “bull” in Greek, of Minos.

The Minotaur was the result of Minos’ wife mating with a white bull, known as Marathonian or Cretan bull, that was sent to Minos by Poseidon. Poseidon wanted Minos to sacrifice the bull to him but Minos was charmed by the bull’s rare appearance. That comes as no surprise.

Regardless of whether this myth is real or not, the Minoan civilization was a real Bronze Age Aegean Civilization – the first advanced civilization in Europe. You can still see their remains by visiting the palaces of Knossos and Phaestos in Crete. If you have ever visited these archaeological places, then you might have noticed the fascination the Minoans had for bulls and bull-leaping or taurokathapsia – a non-violent ancient Greek sport involving bulls.

The king decided to keep the bull at his residence, and he made a different sacrificial offering to the god of the sea. Poseidon was furious and made Mino’s wife fall in love with the animal. The result was the birth of the Minotaur. The beast resided in a special area of the palace; a labyrinth that was designed by the architects Daedalus and Icarus.

When Theseus learned about the agreement between Aegeas and Minos, he became angered. As the future king of Athens, he wanted to end this and he decided to travel to Crete with the next ship sailing with the young Athenians. He would find the Minotaur and destroy him, just like he did with the monsters and criminals he had found in his way.

The future king of Athens promised to Aegeas he would return victorious. He would depart with black sails – a sign of mourning- but he would return with white sails. In this way, his father would be able to see the boat from afar and start organizing the celebrations that would follow. If he was defeated, the captain wouldn’t change the sails and his father would be able to start preparing for his funeral.

Theseus arrived with the rest of the young men and women at the palace of Knossos and he was surprised to see a luxurious and colorful palace with a very strange design. It resembled a labyrinth. The Athenians had to leave any weapons behind and they soon learned that they would be left to wonder in the palace’s corridors for days and the Minotaur would hunt them down and eat them one by one. Even if the Minotaur was unable to find them, escaping the labyrinth was considered an impossible task.

The prince was not scared. He was able to hide a small knife in his tunic to protect himself, but his most helpful weapon were actually his good looks. King Minos had many children and one of them was princess Ariadne. The young woman felt a strong attraction towards Theseus and wanted to help him. When no one was looking, she offered him a ball of thread and advised him to tie it at the entrance of the labyrinth and use it to escape once he defeats the beast.

Theseus followed Ariadne’s instructions and started exploring the labyrinth holding the thread. It didn’t take long to find the Minotaur sleeping. The monster woke up from his sleep and attacked him. Theseus, having Poseidon’s blood running through his veins, was able to overpower him and with his small knife he was able to give him a fatal blow in his neck. He then run back to the entrance of the labyrinth, along with the rest of the Athenians.

They were all free and no one was there to stop them from leaving. They all entered the boat that was waiting for them and soon realized that Ariadne and her younger sister, Phaedra, were also on board. Ariadne wanted to escape with Theseus and live with him in Athens.

The Return of Theseus

The trip back home started with celebrations. Not only did they survive this ordeal, but a very dangerous custom was coming to an end. No other Athenian would have to be sacrificed to the Minotaur anymore. At some point, they made a stop at Naxos island. Goddess Athena visited Theseus and instructed him to leave Ariadne there for god Dionysus.

Theseus was distraught but he knew that he had no choice. He couldn’t disobey the gods. Ariadne was abandoned in Naxos island and Theseus left with the rest of the crew, including Phaedra. The mood onboard had shifted. No one was in the mood to celebrate and they forgot to change the sails from black to white.

Aegeas was standing at a cliff at Sounion in Attica, near Poseidon’s temple. He was staring at the horizon, waiting for Theseus’ boat. And he finally saw it. But the sails were black, meaning that the crew wasn’t bringing any good news. Was his favorite son, the one who was conceived under such difficult circumstances, gone? Aegeas jumped off the cliff and drowned in the waters that we now know as the Aegean Sea; the sea of Aegeas.

The myth of Theseus ends here, however, countless poems and plays have tried to give another ending to his story. Most of the variations mention that Theseus ended up marrying Phaedra, he had many children with her and other women, and ended up dying after falling from a cliff. Others, want him married to the queen of the Amazons.

As mentioned in the beginning, it is not clear whether there was an Athenian king named Theseus, whose life resembled the myth. However, Theseus’ myth signifies a transitional period in history – from Bronze Age, to Iron Age, and then, finally, to the Archaic Period.

3 Replies to “Theseus and the Minotaur | #GreekMyths”